Thanks to Scolopendra, Compgeke, Adam B-L, Rabenaas, and Theros for some questions and thoughts!

A Quick Intro to Lens Accessories, Lenses, and Cameras

In modern parlance, a camera’s a tool for capturing an image. There’s a lens for capturing light, a sensing medium that undergoes changes due to the light, and affordances to transform the changed medium into a new image. For a wonderful and exhaustive introduction to how these systems work, check out “Cameras and Lenses” by Bartosz Ciechanowski.

Photography is fun as hell and also important for modern society, and there’re a bunch of engineering tradeoffs to be made when making cameras. You can’t take a picture if you don’t have a camera, so there’s tremendous value in having a small but complete camera system jammed into a smartphone, and that’s legitimately an incredible combination that’s got billions of people having fun taking pictures.

On the flipmode, if you’re willing to deal with a bigger, heavier camera that does less than a phone, you’re going to be spending that weight and volume on a nicer sensor, and a mechanism to allow swapping lens assemblies. If you have the right configuration ready at the right time, you can take a better-looking picture than a phone camera, just because the physics works better when you have more lens and sensor area to capture light with.

A convenient thing is for lenses to be able to change their length/angle, or “zoom” to change the composition of a shot independent of where the camera is in physical space. Zooming is nice in still photography, but super useful in cinematography, which thrives on being able to recompose a frame gradually for artistic goals.

I don’t have any formal cinematography training. In the ’90s and early ’00s, I took video production classes in middle and high school using VHS camcorders, we had an 8mm camcorder at home, and all of those had smooth pushbutton zoom. If you’ve seen videos from that era, you’re familiar with the look. For me, it evokes a low-resolution time and date superimposed in the corner, a TV showing a harsh blue screen on a metal cart, and the flimsy little fade lever on a Videonics MX-1 Digital Video Mixer.

Smooth zoom is useful beyond those formative memories though; it enables a “dolly zoom” cinematographic technique. Zooming in on a character while moving the camera away, or the reverse zoom-out while moving in, evokes an uneasy feeling of the character’s perception or relationship with the world rapidly changing.

When I got my DSLR last year, it came with the EF-S 18-55mm f/3.5-5.6 IS II kit lens, which is fine I guess. It’s built like it was designed to be included in an entry-level camera, which is to say cheap, but not in a way that would alienate a customer that could eventually get into lenses with white paint or red stripes1. It’s got a useful range if you’re not really into taking pictures of skittish urban wildlife. I escalated to a used, kinda busted, but also $75 EF-S 55-250mm f/4-5.6 IS lens, which helped me learn a lot about long lenses, but had janky as hell manual focus and autofocus that was slow AF. Its range isn’t great either. It’s good for animals and flowers, but if I want to take a picture of a place or a vibe, eh. It’s fine if I know what I’m going to take pictures of, or want to futz with a separate wider lens, but for a hypothetical “vacation” I’d want something less-distracting that can do it all.

Canon’s made a few 18-135mm EF-S lenses. It’s a useful range! I got the “USM” (Ultrasonic motor) kind2, which is fast, smooth, and quiet. It’s also (as of writing) the only lens that supports the PZ-E1 Power Zoom Adapter, by having the exposed gear teeth and control contacts that interface with it.

I’m going to mention the concept of the lens being “awake” below. It’s not just a package of optics, but instead has a little computer that drives the focus motor, which it needs to do to keep focus while zooming in and filming video at the same time. Since it’s powered by the camera, it will go to sleep after a few seconds of no camera activity. It wakes up with a start, racking the focus all the way in and out, but it’s pretty fast about that. The focus ring is also just requesting the computer to focus, similar to an automatic transmission with little flappy paddles on the steering wheel.

The PZ-E1 has a few controls on the side. A big locking lever, a zoom lever that slides forwards and backwards, a manual/power zoom (“MZ” and “PZ”) switch, and a switch between slow & fast. When locked on to the lens, while the camera and lens are awake, and set to “PZ,” you can use the zoom lever to control the zoom.

Any time it’s attached and set to “PZ,” you should not manually zoom. Even if it’s sleeping or if the camera’s turned off.

The lens has a zoom lock to keep it from slowly extending itself while the camera baps around on your chest/hip/butt while you walk around. The PZ-E1 manual says “If the lens has the zoom ring lock engaged, power zoom will not be possible even if the lamp is on.” I suspect the zoom motor’s set up to not cook itself in this case, although I don’t know if it’s an electronic interlock or if it just doesn’t try very hard.

“Slow” is in fact slow, taking over ten seconds to go all the way from 18mm to 135mm, and then another ten or so to come back from 135mm to 18mm. “Fast” zooms all the way in just over three seconds from when you move the slider. It takes about a second to get started in either speed, which is included in those numbers.

If it’s set to “MZ” manual zoom, you can zoom manually. I find that unpleasant, since the zoom motor covers up the part of the lens I like to hold. Unlocking and removing it works, but it’s not easy to snap it back on.

It’s audible when you zoom on fast, basically not on slow. The “mic” recordings are done with a Blue Yeti, about 3” from the camera, and a freshly-opened can of La Croix about 9” away.

The PZ-E1 can also be operated from the computer or phone apps. Supposedly. The entry-level camera I have doesn’t support this.

I’ve toyed with the thought of using one of those shitty little rental scooters, but that seems like a good way to break expensive things like lenses or bones. A car that creeps at a fixed speed might be ideal, but then it’s a group film project, and I’ve not done one of those since high school.

Beyond the dolly zoom, you can use it like a normal camcorder, but honestly, snap zooms are cool, and the place the PZ-E1 attaches to makes it hard for me to do those.

Aside from not having a smooth way to control the camera’s position in space, I don’t have a particularly comfortable camera to hold. Big VHS video cameras aren’t too bad to keep on your shoulder for hours, small 8mm video cameras aren’t too bad to keep mashed up against your face for a few minutes, but the issue with a DSLR as a video camera is the SLR part. There’s only one lens, and it’s exclusive between the sensor and the viewfinder. When in video mode without an external display (i.e. looking for animals at the park), you can only use them with the big screen on the back. Without a tripod, and with the PZ-E1 attached, you’re cradling a 1200g (2.6lb) camera about a foot away from your face. 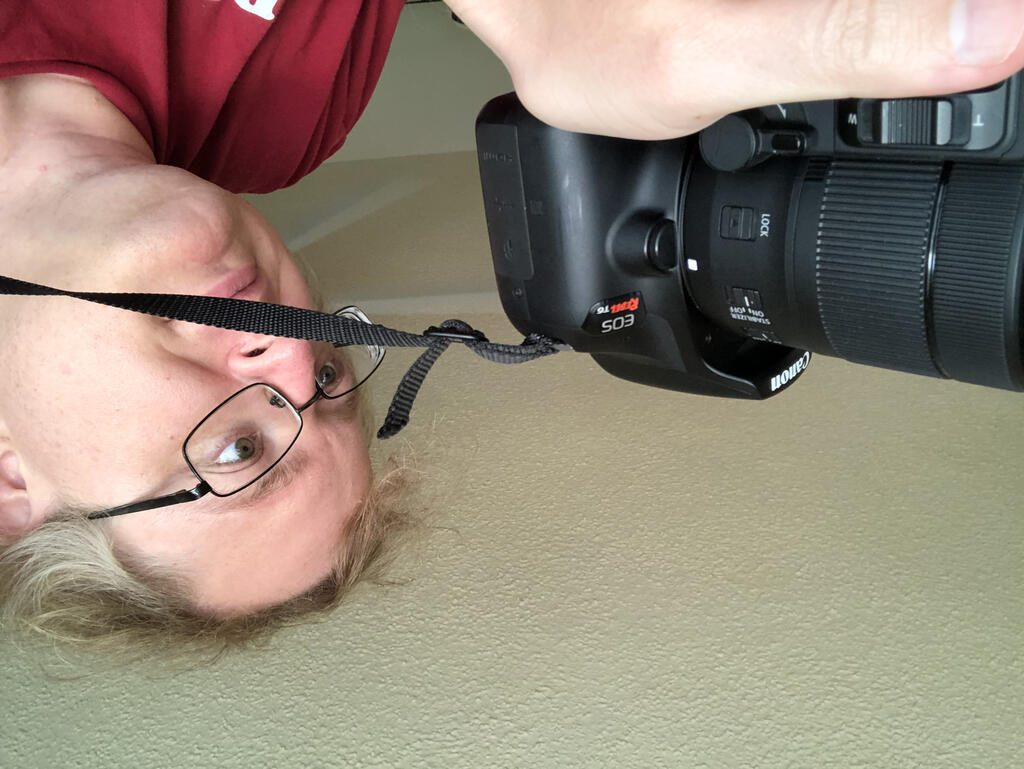 If I was filming a bike race or something, where I wanted to park my tripod somewhere and take smooth footage, it’d be different, but I’m usually busy volunteering to run a radio at those events.

“How precise is the step motor/servo?” As far as I can tell, it’s not.

“How much weight does it add to the camera?” With the motor and four AAA batteries, it’s about 13% of the whole assembly with my Rebel T6.

“Can I do the same thing with a servo motor and a raspberry pi?” Probably, but a Pi would be overkill. If you don’t want to RE the eight contacts between the lens and zoom motor (or don’t think they add much value, like if you have an older/cheaper camera that doesn’t have any control functions), an ESP-32 would be fine. 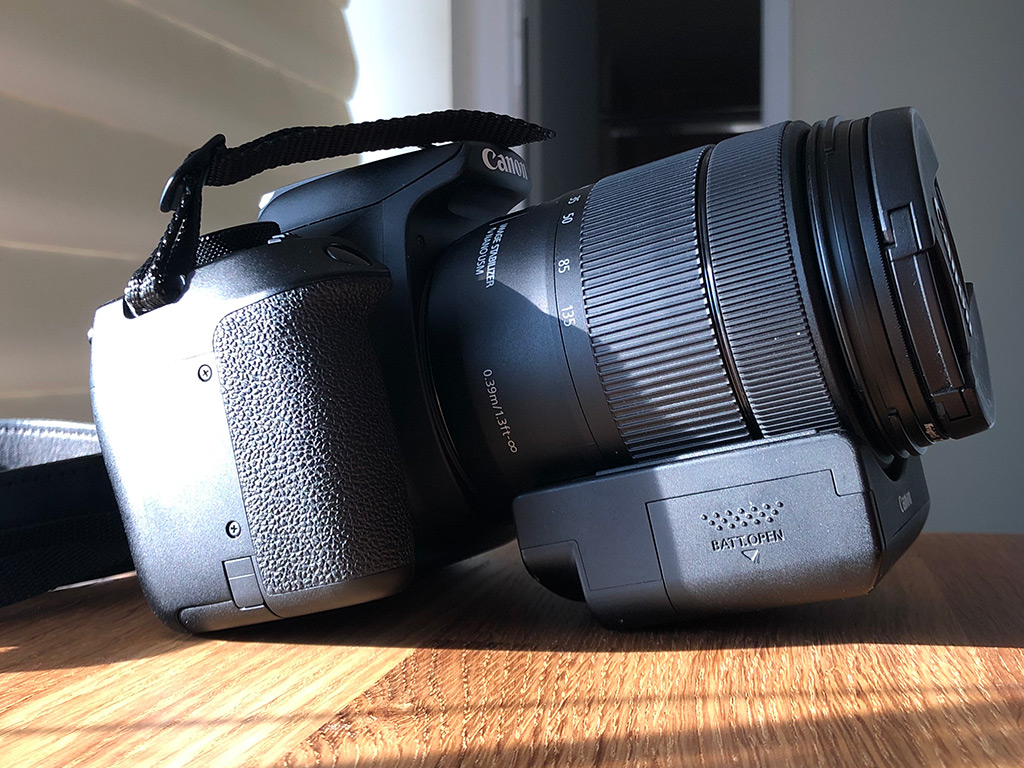 If I was doing this like a Jon Bois video, I’d look right at the camera, inhale, and roll the credits to the jaunty sax music.

I don’t film videos with my DSLR or phone much. However, since the dependency chain for a good video includes a script, and I honestly prefer to read prose than watch videos online anyways, you get (well, this far down the page, got) the words. I don’t see the PZ-E1 changing that.