Back in late 2016 I wanted a good way to search posts from da share z0ne, a lovely account posting feel-good and brutally funny stuff juxtaposed on top of heavy metal iconography of flaming skulls and grim reapers. 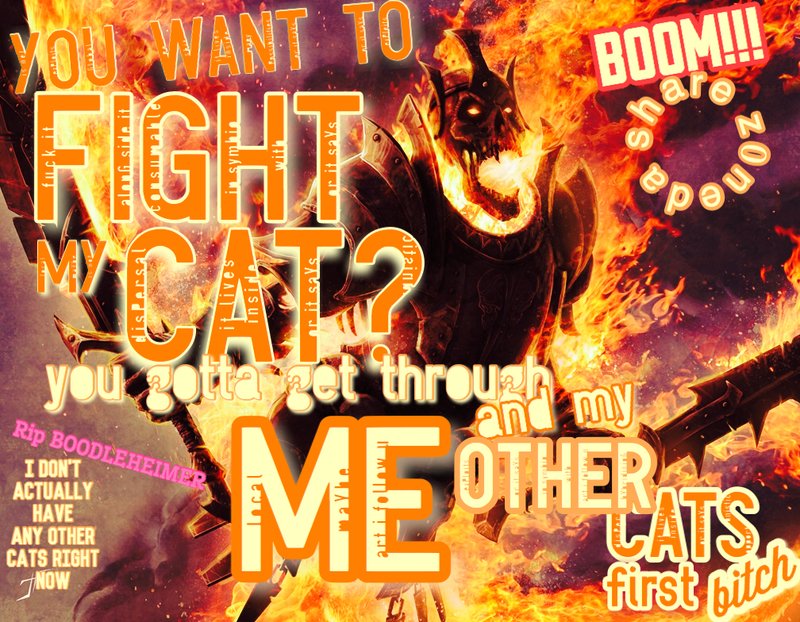 My friends and I found a lot of these posts really sticky, sharply defining an intriguing and hilarious character, and as such needed to share links to these posts frequently. However, how do you search a picture of text?

I’d made an Elixir Phoenix1 app earlier in 2016, and decided to try and make another one instead of defaulting to Rails like I usually do. Originally, it used the then-current Phoenix 1.2.1 and Elixir 1.2 (initial commit). Set up a Postgres database with full-text search, schedule an update every hour, and an admin interface where I transcribe random images by hand. I deployed it on Heroku using the Phoenix “Deploying on Heroku” guide and that was that.

And then time moved on. First, I got frustrated at the rule I’d set for myself about transcribing quotes and retweets, and quit updating it.

Then the cedar-14 stack hit end-of-life (EOL), but the app kept on truckin’.

At some point, however, it quit starting, and when I looked at it, the heroku logs just showed that there were too many log messages.

(I’ve removed timestamps from the logs to make them easier to read).

The first thing I did was to restart the server dynos2 with heroku dyno:restart. Didn’t fix anything, so I did a heroku dyno:stop, gave the “logplex” logging system some time to flush its buffer, and then hit the website again.

I enabled “maintenance mode”, which just throws up a nicer error screen. Then I captured and pulled a Postgres backup, and noticed that Heroku’d been dutifully capturing one daily (only retaining eight, not the over sixteen hundred it’d ever grabbed). After that, I made sure I had an up-to-date local copy of the app, and started the work of modernizing it.

First step was installing modern Elixir; lately I’ve mostly been using Docker for that, so I cribbed from geometerio’s example when writing a new Dockerfile from scratch. I’m not using the new one in production, so I mostly just care about package installation.

With that up and running, I updated the dependencies, mix deps.update --all, and tried to redeploy it.3 This got me to a new error from the Erlang & Elixir Buildpack:

The buildpack grabs its version from elixir_buildpack.config, so I updated that.

Next were a bunch of errors about PG2, which first sent me on a wild goose chase trying to update the postgrex Postgres library. It looked up to date, so I started searching, and found a good Elixir Forum thread about the PG2 error, in which José Valim (the creator of Elixir) notes that you can update the phoenix_pubsub library. I tried that for a while, but I didn’t really want to update phoenix4, which pins a phoenix_pubsub version. Further downthread, someone else mentions that you can remove it from config.exs if you’re not using it, which worked.

Finally, there was an error on application start about it needing plug_cowboy, so I installed that,.

With that change, da search z0ne is up and running again!

Things to Fix, Things to Update

There’re a few things I’d still like to do with da search z0ne:

On that last thing, there’s something that’d be nice to have from the Phoenix framework: easier-to-find upgrade guides. I found a Phoenix 1.4 to 1.5 guide by Chris McCord (Phoenix creator) on his Gist5 site, but, as far as I can tell, that was mostly a chance search engine find. A guides site similar to the official and excellent Ruby on Rails Guides site would be a nice place to keep both old-version release notes and an up-to-date guide on getting to the newest version, but to me the Phoenix documentation site just kind of feels like an awkward API site combined with an awkward prose site.