Earlier this week a park I like to walk through was suddenly fenced off and preparing for a thing. The fences had “Electrify Expo” signage on them, as did some banners over the street. It was about electric vehicles, which, complex feelings, but I asked around and got a free ticket so whatever. Didn’t have any other big plans for today.

It was really obnoxious to get in. The entrance was pretty far from Bayshore Drive, with the sidewalk inside the fence so everyone walked in the bike lane between the parallel parking stalls and the active traffic lane. There were lots of cops around controlling vehicle traffic, but it wasn’t bad at 10am when they opened to the public.

Once I got in, I looked at the Kia static displays, but then immediately saw there was barely anyone at the BMW demo line, where there were two SUVs and a sedan to try. I queued up for the “BMW i$ M50.”

I haven’t driven a BMW probably since 2006, so everything except the steering wheel was unfamiliar. One of the attendants coached me through getting it into gear, I figured out which controls on the door set the side mirrors properly (they’re right next to the button that makes them useless), and then I was alone in the car and off on a drive.

Kind of. BMW was the first brand on the loop of demo stations, so there was a good three minute drive through the demo loop before you even got to the city streets, and those were of course not particularly fast either either from traffic arriving or leaving the show, traffic just going through, and of course the additional traffic of demo cars. I think the only times I broke 20 mph were taking left turns across Bayshore, but hey, electric cars make that easy.

So, BMW i4: it’s an electric car with a bunch of screens everywhere, confusing infotainment controls (and the a/c is part of that now), confusing transmission controls, but it scoots and still looks like a normal car.

After the ten minute drive, I walked past the line at the Polestar (Volvo’s performance EV brand?) compact SUV lineup to the Volvo proper demo station, which was… compact SUVs. There wasn’t a line, so a staffer and I ended up in a very cute rainbow-colored lifted station wagon. 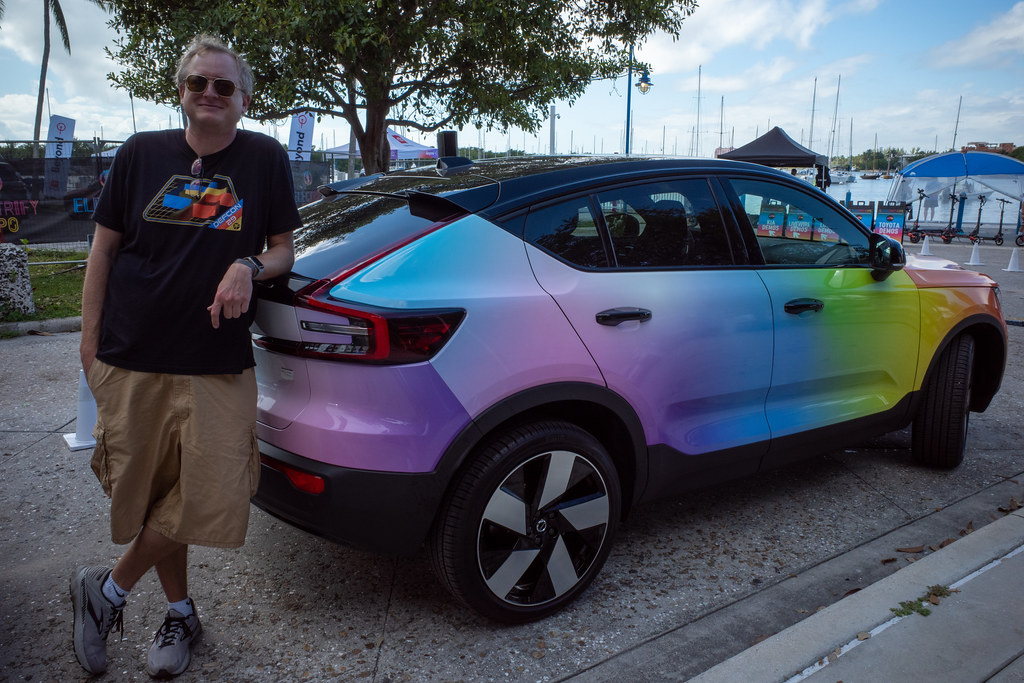 The Volvo C40 was neat! It had “one pedal driving” enabled, which is an interesting electric car trick.

My car has three pedals. The accelerator pedal controls the flow of air into the engine, letting it burn more fuel and spin faster as it gets pushed more. The brake pedal burns off speed. The clutch pedal decouples the engine from the transmission to let me change the ratio of engine speed to wheel speed.

Two-pedal driving like in your classic automatic gas car or a Prius loses the clutch. One pedal speeds up, one slows down.

One-pedal driving is in a bunch of different EVs I guess? Putting the accelerator down does what it does, with the enviable instant on electric motor torque (the dancing is left to electrons), but letting off that pedal switches the motor to regeneration mode, sending that kinetic energy back to the batteries instead of into the environment as heat and brake dust. The effect is like a downshift to brake in my car, but without having to clutch out and blip the throttle. It’ll brake all the way to a dead stop, automatically switching to the mechanical brakes at a low speed where the regen doesn’t work so hot.

I drove the Volvo went on a slightly shorter loop that everyone but BMW used, still slow from traffic, and I never did get all that used to the one pedal. What got me was either letting off the gas immediately braking, or the kind of crunchy feeling mechanical brake activation.

The next one I drove was the Volkswagen ID4. It didn’t feel like the two luxury cars I’d already driven, a bit lighter, much smaller screen for the driver’s stuff. VW hid the gear shift (mode selector?) somewhere completely obstructed by the steering wheel, and the infotainment system was extremely laggy too.

The driving experience itself was pretty indistinct. I literally don’t remember if this car had the one-pedal mode activated, and everything else is just kind of a blur of left turns and brake lights. I imagine that if you’re not paying for luxury, you’re getting parts bin stuff in different cladding, much as how it works in gas cars and every other industry.

All morning, the weather had been cloudy and drizzly, but only on this drive did the sky really open up. While it had cleared up by the time we got the VW parked and finished the demo, I figured I only really had one demo left in me, so I went down to the Lucid tent, where there were a bunch of people waiting out the sudden rain shower, but I was intrigued by a new car brand I barely knew anything about.

Everything at this tent seemed de luxe; fabric wristbands instead of paper ones, a few people leaving with hats and shirts, a couple cocktail tables and chairs for people waiting. I stood around talking to one of the people there while waiting my turn. One of the cars pulled up, and the guy doing the demo showed off the trunk, frunk, and the motorized closing for them. And then it was my turn.

When there’s rain, I’m used to using a steering wheel stalk to control the wipers. I’m not used to activating them with a stalk but then using the touchscreen to the left of the instrument cluster to change how fast they are.

I kind of feel like a lot of this is change for the sake of change. I’ve driven some cars with stupid controls. Jamming all the turn signal, windshield wiper, and cruise control operations on to a single stalk like the ‘88 Grand Voyager? Not good! I think I drove a Benz once where you’d smack the cruise stalk if you turned the steering wheel and tried to hit the turn signal at the same time. However, there’s a huge swath of normal non-luxury cars from the ’90s and ’00s that don’t have those problems! They have gear shifts that make sense and don’t kill people and steering wheels that you can adjust by simply releasing a lever and moving the wheel to where you want it! Side mirrors are best handled with a motor, sure, but do you really need to make the “collapse mirrors” button literally touch the directional control?

Every time I was asked by someone today if or when I’m getting an electric car, I told my truth: I don’t know. I already have a car that works great and that I don’t hate, and I don’t see a need to replace it. All these EVs are fine cars, I guess? They pollute differently than gas cars, less tailpipe emissions, less maintenance, less brake dust, but there’s so much that goes in to them and for what? So you can sit in a dead silent car surrounded by other cars going nowhere? So some rich asshole can turn city streets into beta testing with a deadly weapon? So everyone can have their own little pod, isolated from birdsong and breezes and recognizing the humanity of anything beyond their little capsule?

I spent my morning in a place I love being sold something I hate. 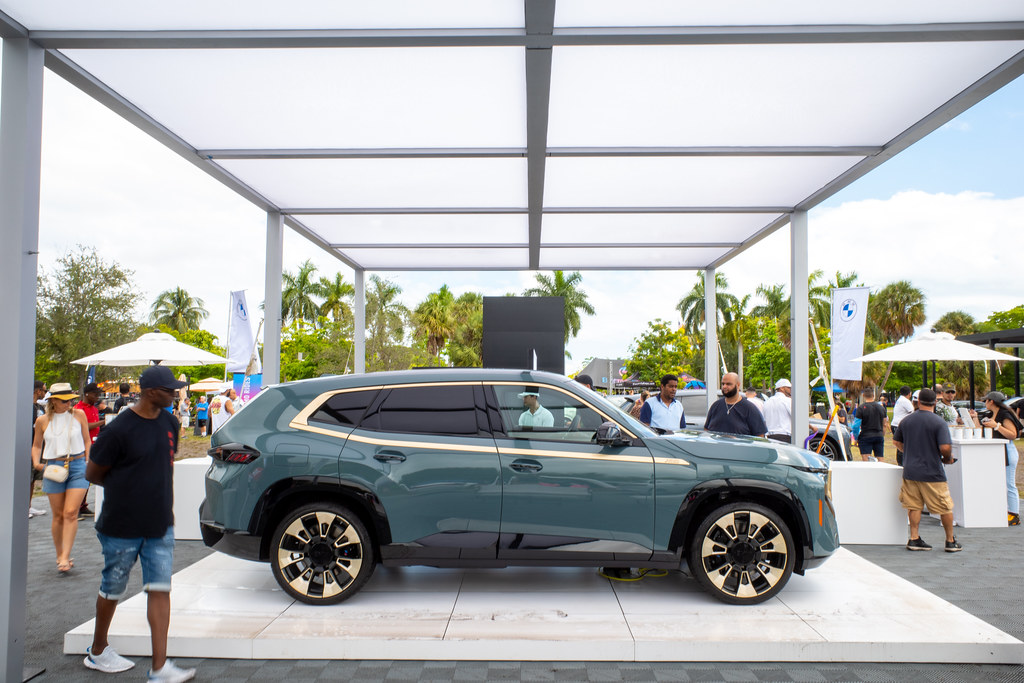 I was on my way out when I realized I should see why the nice picnic tables under the palm trees were blocked off. The electric bike demo area was very hectic! No lines, just scads of people learning controls and making quick seat adjustments before zipping off on a prepared track.

I tried a Mokwheel bike first, and it was kind of nice to have both a throttle control you could twist for speed and the “pedal assist,” just an extra push you feel when you pedal. However, I found myself turning off the assist and just riding in the straights.

The other one I tried was at the Bosch tent, and they only supply the hub motor systems that just do pedal assist. Still fun, and I did kind of the same thing: pedaling the whole bike myself was pretty great. 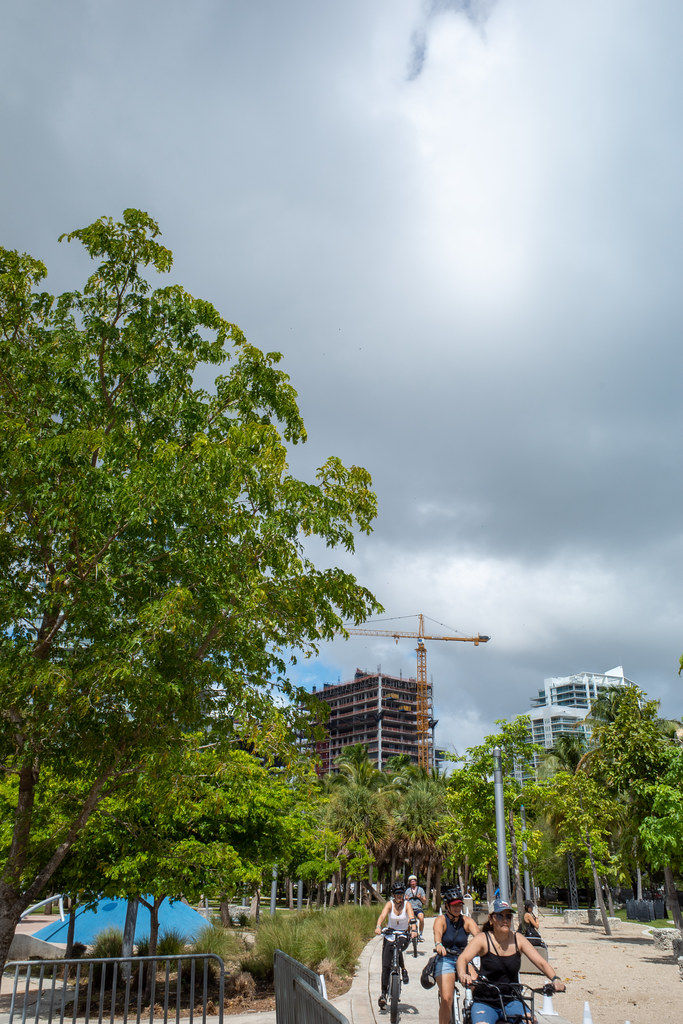 I went by the main Mokwheel tent after that to figure out if they had any bikes that didn’t have the super fat off-road tires (they have one) and what their fancy power system was (charge the bike’s battery pack off solar panels, and invert it to AC to charge 110V stuff if you need to).

I could see being in to that? There’re some places I’d like to go more often that either aren’t in a comfortable walking distance or walking plus transit, and I bet some kind of electric-assisted bike would bridge that gap.

(Jerry Seinfeld voice) why do they call it “riding a bike” when you do all the work but “driving a car” when you mostly just sit there?

By 1pm I felt finished; looked at all the cars I cared to, sat in some of the static displays to figure out which ones I didn’t fit in (the Polestar 2, the lower part of the center console is where my knee wants to go), and I was getting hungry too.

I made my way past the line of parked cars, against the flow of returning demo cars, and hearing the sizzle and whine of bikes zipping by on the other side of the fence.